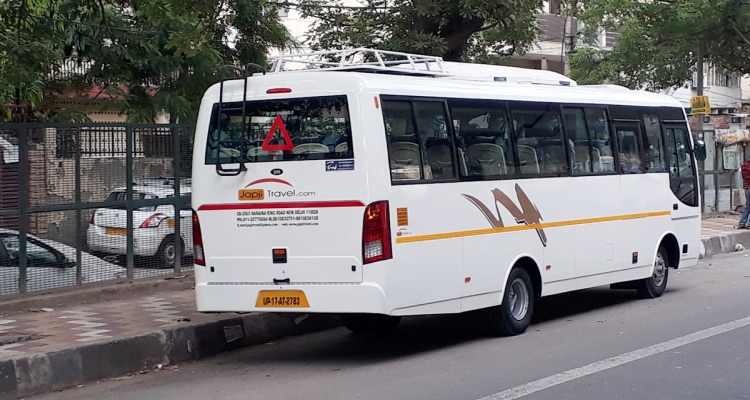 A beautiful sightseeing experience of famous places in Delhi, Agra and Jaipur in 4 days.

A fun packed experience of India Golden Triangle by Minibus in the interval of 4 days. Covering the most famous places in Delhi, Agra and Jaipur. The India Golden Triangle by Minibus begins with full day Delhi sightseeing experience following with visit to the city of Agra, the very next day. After witnessing the beauty of Agra for a day, leaving for the city of Jaipur via Fatehpur Sikri next morning. After reaching Jaipur in the afternoon, experiencing the beauty of the Pink City for one and a half days. The wonderful travelling experience is created by TempoTravellerHire.in .

The detailed itinerary of India Golden triangle by Minibus is as follows :-

Lutyens’ Delhi- India Gate (photo stop), Rashtrapati Bhavan & Parliament House (drive through). Lutyens’ Delhi was designed by Sir Edwin Lutyens, a British Architect. Lutyens’ Delhi was designed after the British Government in India decided to shift their capital from Calcutta(Kolkata) to Delhi in 1911. Visiting India Gate, a war memorial created for the soldiers of British Indian Army who lost their lives in the First World War and Second Anglo- Afgan War. After visiting India Gate, a drive through of Rashtrapati Bhavan and Parliament House. Rashtrapti Bhavan (formerly known as Viceroy's  House)serves as the official residence  of the President of India. Parliament House (also know an Sansad Bhavan) is an impressive building structure, which consists of two houses, namely Lok Sabha and Rajya Sabha.

Red Fort- Fort having beautiful walls built with red sandstone, served as the residence of Mughal Emperors, after Mughal Emperor Shah Jahan decided to shift his capital from Agra to Shahjanabad(Old Delhi) in 1639. Every year, Prime Minister hoists the Indian Tricolour Flag at the main gate of the fort on the occasion of Independence  Day(15th August).

Rajghat- A memorial dedicated to Mahatma Gandhi located to the west bank of Yamuna River. After a peaceful experience at Rajghat, we shall leave for Humayun’s Tomb.

Humayun’s Tomb- Tomb of Emperor Humayun, built between 1565-1572 is an excellent example of Indo- Islamic Architecture built with red sandstone and white marble.

Dilli Haat- Late in the evening, we’ll stop for shopping at Dilli Haat (Shopping is subject to time).

After a wonderful day of Delhi Sightseeing, staying overnight in Delhi.


Day 2- Early morning departure to Agra, arrival & hotel check in and sightseeing in the evening.

Taj Mahal- Taj Mahal is an ivory-white marble mausoleum on the south bank of the Yamuna river , built by Mughal Emperor Shah Jahan in the memory of his beloved wife Mumtaz Mahal in 1632. It houses the tomb of Shah Jahan and Mumtaz Mahal. Taj Mahal is considered to be the greatest architectural achievement in the whole range of Indo-Islamic architecture. It has been declared as World Heritage Site by UNESCO. Taj Mahal is also known for it’s beautiful interior and exterior decorations. People from all over the world visit Taj Mahal to cherish it’s beauty.

Agra Fort- Agra Fort is a historical fort which had been a place of residence of Mughals till 1638, when the capital shifted from Agra to Delhi. It is a World Heritage Site declared by UNESCO. Other places in the fort include Shish Mahal, Jahangir’s Hauz, Shahjahani Mahal, Jahangir’s Chain of Justice, etc.

After witnessing the greatest of the architecture, overnight stay in Agra.


Day 3- After breakfast at the hotel, leaving for the city of Jaipur via Fatehpur Sikri. After arriving at Jaipur, visiting the City Palace. Later in the evening, visiting the local market for shopping. Overnight stay at Jaipur’s hotel after a long day. Places covered during the visit are as follows-

Fatehpur Sikri-  Ancient city which served as the capital of Mughal Empire from 1572 to 1585, founded by Mughal Emperor Akbar. Fatehpur Sikri is enclosed by red sandstone wall which has various gateways. The city is home to famous monuments such as Jodha Bai's palace, Jama Mosque, Buland Darwaza, Tomb of Salim Chisti, etc.

City Palace- City Palace was built by Maharaja Sawai Jai Singh, who is known as founder of the city of Jaipur. The palace is divided into two parts, one is open for the public & also has a museum and the other part serves as the residence of the Royal Family. The palace consists of Mubarak Mahal, Chandra Mahal, Bhaggi Khana, Maharani Palace, Silehkhana and Govind Dev Ji Temple. Mubarak Mahal is now a museum dedicated to Royal Textiles. There is a display of cloths worn by Kings and Queens. Chandra Mahal is the residence of the former King of Jaipur. Chandra Mahal provides an unmatched scenic view of the city of Jaipur. Each and every floor of Chandra Mahal has it’s own importance. Bhaggi Khana is a place for the Royal Chariots and coaches. It also has a European Cab which Maharaja Sawai Ram Singh II got gifted by Queen Victoria herself. Silehkhana is a place where collection of weapons and handguns used in those times is kept. Personal weapons of the Kings are also displayed here.

Visiting local markets of Jaipur in the evening for shopping.

After sightseeing of City Palace, overnight stay at Jaipur Hotel.


Day 4- Full day Jaipur Sightseeing and drop at Jaipur Airport in the evening.

Hawa Mahal- Also known as Palace of Winds was built by Maharaja Sawai Pratap Singh, grandson of Maharaja Sawai Jai Sngh, founder of the city of Jaipur in the year 1799. The palace is a five-story pyramidal shaped monument built with red and pink sandstone. It is a true reflection of  fusion of Hindu Rajput and Islamic Mughal architecture.

Jal Mahal- Also known as Water Palace, is situated in the middle of Man Sagar Lake.It was built by Maharaja Sawai Pratap Singh in the year 1799. The Jal Mahal is made up of pink sandstone and follows the classical Rajput symmetrical style.

Amer (Amber) Fort- Amer Fort is located in town of Amer, 11 km from the city of Jaipur. It was ruled by Raja Man Singh I. The fort is made up of red sandstone and marble and greatly influenced by Mughal Architecture. The fort consists of Diwan-e-Aam, Diwan-e-Khas, Sheesh Mahal and Sukh Niwas, where cool climate is artificially created by winds that blow over a water cascade within the palace.

Drop at Jaipur Airport in the evening after the Jaipur Sightseeing.
Feel Free to Contact Us