It is important for the tourists to know about Bikaner before traveling to the city situated in the heart of the desert. The kingdom of Bikaner was established in the 15th century when the valiant son of Rao Jodhaji, the founder of Jodhpur, enraged and provoked by his father, quit the palace to establish his own kingdom. The detailed history of Bikaner reveals that the establishment of the kingdom was foretold by the mystic Karni Mata. It was in the year 1488 that the founder of the city, Rao Bikaji fortified the city that was called the city of Bikaner.

Bikaner, India is one of the most frequented desert cities of the state of Rajasthan. The geography of Bikaner reveals the topographic location of the region. The settlement has developed outside the fortified city. Vegetation of the region comprises of the sparse growth of the desert vegetation. With the construction of the Ganga canal, it has been possible for the people to engage in the agricultural production of other crops in the green area of Bikaner. 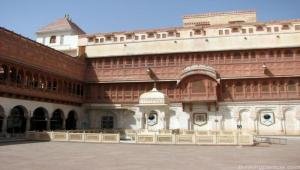