The History of Jaisalmer has a charm of its own. Like all other cities of Rajasthan, Jaisalmer too has its own glorious past to boast about. History of Jaisalmer draws heavily from the history of the Rajputana. The city is said to be founded by one Raja Rawal Jaisal, a Bhatti Rajput ruler, in approximately 1156 A D. Legends go by that he did it on the behest of a local hermit named Eesaal. The raja choose Trikut hill as the new site for his fort. This was because he thought that his previous abode at Luderwa (16 km from present Jaisalmer) was vulnerable towards possible enemy assault.

In medieval times, Jaisalmer continued to be on the focus of the masses because of its location. It falls in the way of one of the two routes, which connected India from Persia, Egypt, Africa and the west. The Bhatti Rajput rulers were still in line. They were the sole guardian of the city and thus mustered enough wealth through taxes levied on the passing caravans, of which there was no scarcity.

For many years Jaisalmer remained out of bound from the foreign rulers partly because of its location and partly because of its relief. In the mid Thirteenth century, Ala-ud-din Khilji, the Turk-Afghan ruler of Delhi laid the siege over the city. He was apparently upset with the Bhatti Rajput rulers because they stopped and looted one of his caravans containing royal coffer which was on its way to Sind. The siege lasted for around 9 long years and when the fall seemed eminent the Rajput womenfolk of the city committed Jauhar (self Immolation to avoid disgrace). 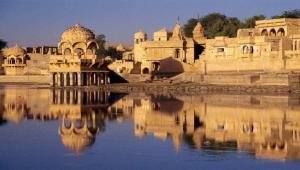