Varanasi city is also famous as Benares or Kashi. It is a city which is located on the banks of the pious river of India i.e. Ganga or Ganges in Uttar Pradesh which is the largest state in India. It is situated around 320 km in the south-east direction to the state capital, Lucknow, and approximately 121 km in the east direction of Allahabad. Varanasi is a major attraction and religious city or the hub in India, it is the most pious and Holiest city out of the seven sacred cities or Sapta Puri as per Hinduism and Jainism and plays an imperative and significant role in the progress of Buddhism and Ravidassia. Varanasi lies at the corner of the National Highway 2 or NH-2, which works as an artery and connects Kolkata, Kanpur, Agra, and the National Capital Region Delhi, and is catered by railways through Varanasi Junction Railway Station and the airport namely Lal Bahadur Shastri International Airport.

The North Indian State of Uttar Pradesh has got around 72 districts and Varanasi is also one of them. The regional languages of Varanasi are Banarasi, Awadhi, and Bhojpuri.

Varanasi plays an important and significant role for being the industrial center, prominent for its Muslin and silk textiles, colognes and scents, ivory works, and sculpture. The city has got its spiritual prominence sustained to propagate since the 8th century, and established by Adi Shankaracharya by worshiping of Shiva in Varanasi. The city has been an attraction since Middle Ages, and a prominent epicenter of Hindu devotees and their devotion, city of pilgrimage, spirituality, and poetry which further contributed to its reputation as a center of cultural reputation and religious edification. Tulsidas inscribed the ambitious epic on Lord Rama's life, commonly known as Ram Charit Manas in Varanasi itself. Several others like Kabir and Ravidas also started their Bhakti movement from Varanasi only. 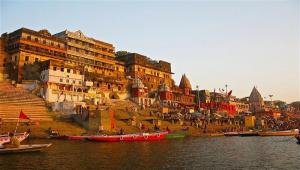