Mathura is considered as the sacred and pious city in Uttar Pradesh, the northern part of India. It is believed to be the Lord Krishna’s Birthplace. It is quite near to Agra around 35 km and around 150 km from the capital of India New Delhi. It has been chosen as the administrative center for Mathura District of Uttar Pradesh. In earliest times, Mathura used to be the commercial and economic hub, situated at the very important junction of Caravan route. Mathura has got 4.5 lac populations as per the census of 2011. As per Hindu believes, there are seven holy cities or “Sapta Puri” and Mathura is also one of them. As per the methodology Lord Krishna got birth in underground prison. Mathura is the capital of the Surasena kingdom ruled by Kansa or the maternal uncle of Lord Krishna.

The plan run by the government of India; the Heritage City Development and Augmentation Yojana has chosen Mathura as one of the rich legacy and heritage city. It is an ancient city having a lot of historical events attached to it and most importantly the place of birth of Lord Krishna makes it one of the most visited places. The Archaeological Survey of India (ASI) has mentioned the city as the oldest Indian Epic. As per the belief, the city was also known as Madhuvan as it was densely covered with wood, then was called Madhupura and eventually called as Mathura.

Delhi Tempo Traveler Hire Service organizes the state of the Art transportation solutions and options with better facilities and structures like Global positioning system, the comfortable Pushback seats, entertainment and amusement systems, internet or Wi-Fi for the purpose of visiting the following destinations in Mathura City:- 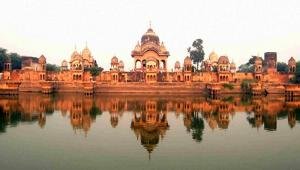