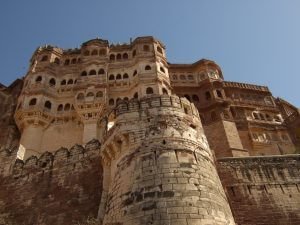 One of the tourist city in Rajasthan is called Jodhpur. About 10 km away from Jodhpur Siddhanth Shiv temple is located. The temple is located between Takhat Sagar hills and Kalyana lake. The temple is on Chopasani road. The path to the temple is going through specials stairs which are made by cutting the rocks to make a defined path for devotees to reach the temple. Earlier the temple area was a desert but the temple which was built over the area turned with some vegetation. Nepali baba named a person whose real name was Veetragi Narain swami built the temple, the man is also popular by another name which is Gauri Shanker.  It is a hardcore belief that the baba cut all the rocks and made the temple himself. The man was having only four fingers in each of his limbs.  On can go and enjoy the pure air and natural scenery with some beautiful architecture. A ritual is being set to recite the mantra Bham Bham Bhole to please Lord Shiva in the beautiful temple out in the city.

In 2006 a park named Rao Jodha desert park was created next to Mehrangarh fort in the area. The vegetation includes the rare cactus which is only seen in the Thar desert. A fee is being taken from all the visitors.  One can go have a look and play on the rocky and desert unique park. Nature lover and biology lovers can compare this place similar to the knowledgeable books.

If you want to see the architectural delight you must pay a visit to Udai temple in Jodhpur. The main entrance gate is carved from the sandstone found in Jodhpur. 102 pillars support the temple whose scripture is considered to be breathtaking.  Picture of Nath yogis are made of gold and the temple has 84 wall paintings of yoga asanas. The upper part of garbh grah is totally covered and several gold pots are put around that. The shining of the pots is still the same.

Umaid Bhawan Palace is said to be the largest private residence in the city. Some part of the big palace is been managed by the Taj hotels. The palace is named so because of the recent maharaja’s grandfather name. the residence is totally a royal house with 347 king sized rooms. A small area of the hotel is turned into the museums to display the authentic and ethnic and traditional weapons, paintings of the state.

A clock tower or commonly called ghanta grah is also situated in the city to enhance the beauty of the area. A Sardar market is located nearby which is the most trusted market by the tourists for the shopping. Rajasthani ethnic and traditional dresses, textiles clay articles and miniature camels are easily available for purchasing. One can get the traditional jewellery here.

60 to 65 km away from Jodhpur the Sachiyan Mata temple is located which is mainly situated in the area of Osian. Many cats residing in the area of northern India, Madhya Pradesh and Rajasthan worship the goddess. The temple was built for the Kul Devi of Parmar dynasty in the 9th century. One can see 1000 snake statue and elephants in the temple with no beggars around. Several other 9 temples are also there which are worshipped during the navratra festival which means devotion of nine different devis.

The area has an artificial lake named as Kalyana lake. It receives the stored water from Hathi Nahar. You can witness many migratory birds and enjoy a soulful boating experience. Many babool trees also surround the lake.